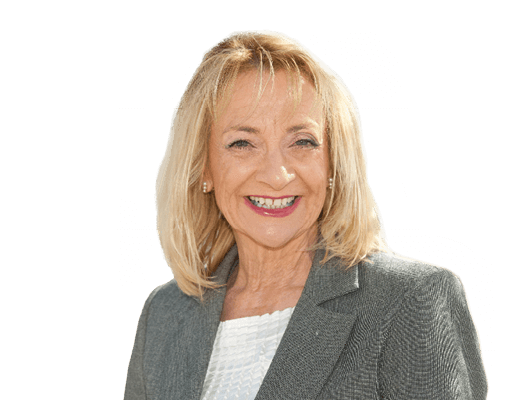 Raised in Brunswick Junction, Nola has spent her whole life in the South West.
Nola worked in an accountancy firm until she married her husband, Charlie. On the same day they were married, they bought their first dairy and beef property in Harvey. Nola worked on their farm helping to develop and grow their family business which includes their son, daughter-in-law and grandson. Their daughter also lives and works in the region.

Nola has been working with and for the community her entire life, helping many community organisations. She was President of the Harvey Football Club for a decade, and she became the first female to be awarded Life Memberships to the Peel Football League and the Harvey Football Club. She’s held various positions on numerous community, regional and agricultural organisations and bodies such as being a Director and Vice Chair of Dairy Western Australia.

In 1996 Nola was the ABC Regional Rural Woman of the Year. In 1997 she received a Certificate for Outstanding Service to the Community in 1997 from the Harvey Shire Council and a Premier’s Australia Day Active Citizenship Award (WA) in 2004.

In 2019, Nola was appointed the Assistant Minister for Regional Development and Territories.

Steve grew up in a large family. His foster father, David, was a local church minister and his foster mother, Mary, a social worker at a hospital. His parents always instilled in Steve that investing in people from all walks of life was the key to building a strong local community.
As Parliament’s only former ward of the state, Steve has an important role in ongoing work for the Forgotten Australians and former child migrants and is well respected by all parties for his bipartisan work on this social policy issue.

With 30 years experience in small business, Steve completed an apprenticeship as an electrician after high school and prior to moving to Western Australia. Later, Steve started work in 1981 for a national company in Welshpool doing clerical and factory work. In 1983 Steve became Sales Manager and went on to achieve record sales. In 1996 Steve became the owner of that company.
Over a long period of time Steve has made many connections with the Kewdale-Welshpool industrial hub, Steve knows there are many great businesses and workers in this hub as it is one of the last true manufacturing areas left in the state, as well as being the premier freight centre.

From 2004, Steve as a single parent became the custodian of his son, Jarrad, and experienced many of the issues families and single parents face. Steve married Cheryle in 2011 and is grateful for the enormous support she provides him working in the electorate, particularly on issues surrounding women’s health.

Currently Steve is a member on the Joint Standing Committee on Foreign Affairs, Defence and Trade.