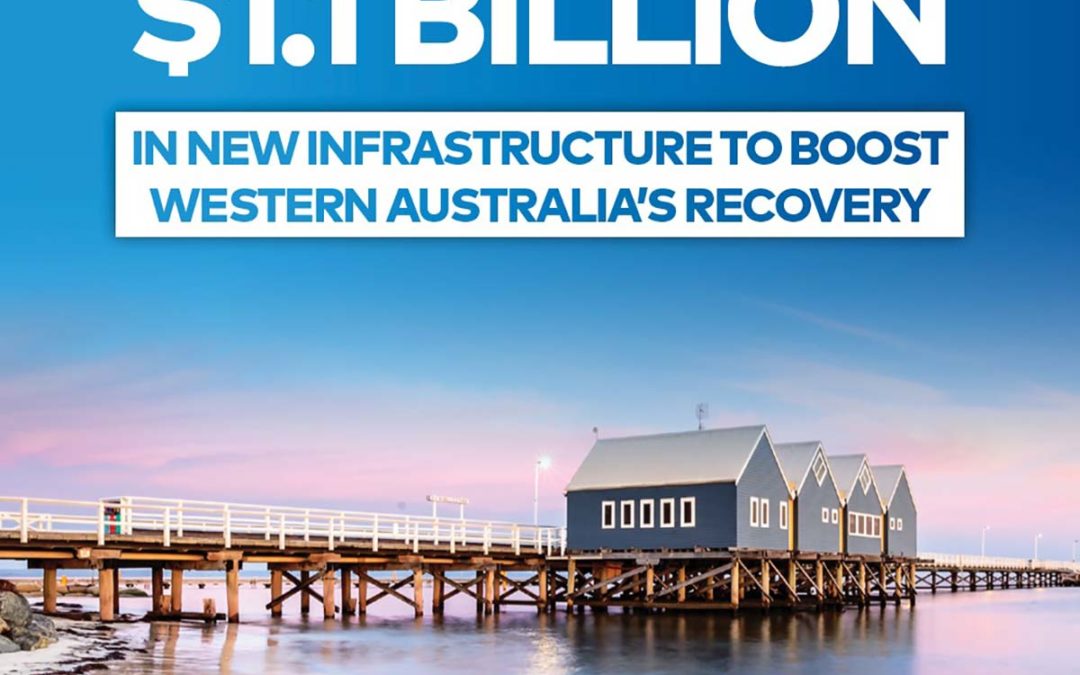 The Western Australian economy will be boosted, roads will be safer and thousands of jobs created, with a $1.1 billion investment into transport infrastructure from the Federal Coalition as part of our COVID-19 economic recovery plan.

The latest funding injection builds on a series of statewide infrastructure investments from the Commonwealth in responding to the COVID-19 pandemic which now total nearly $1.3 billion.

Key investments for WA include $88 million for the Reid Highway Interchange with West Swan Road; $70 million for the Roe Highway Widening and Abernethy Road Upgrade; $16 million to undertake sealing of priority sections of the Goldfields Highway between Wiluna and Meekatharra; and $16 million to undertake upgrades on the Broome-Cape Leveque Road and associated community access roads.

“We have been working closely with state and territory governments to invest in the infrastructure that is ready to go and can help rebuild our economy and create more jobs,” the Prime Minister said.

“These projects will keep commuters safe on the road, get people home to their loved ones sooner and provide better transport links for urban and regional communities.”

“As part of the COVID-19 economic recovery plan we have invested an additional $1.3 billion focused on shovel-ready projects across the state.

“This latest investment will provide another boost to the local economy and is part of our plan to support an estimated 6,800 direct and indirect jobs across the state.”

Deputy Prime Minister and Minister for Infrastructure, Transport and Regional Development Michael McCormack said the Government is focused on delivering priorities and boosting local jobs as part of Australia’s road to recovery.

“We will draw on local businesses to stimulate local economies through these projects,” the Deputy Prime Minister said.

“Infrastructure means jobs, it means livelihoods, it means stronger local communities and it means building a better and more secure future for our nation.”

Minister for Population, Cities and Urban Infrastructure Alan Tudge said the infrastructure boost across Perth and Western Australia would help provide certainty on the economic road back from the pandemic.

“Key investments across WA include $16 million for sealing and other improvements to the Goldfields Highway between Wiluna and Meekatharra, as well as a further $16 million to upgrade Broome-Cape Leveque Road and Community Access Roads,” Mr Tudge said.

“The Australian Government will continue to invest in the WA economy in the coming years, through congestion-busting projects such as $88 million for Reid Highway Interchange – West Swan Road, as well as $70 million towards the Roe Highway Widening and Abernethy Road Upgrade.

“The newly announced City Deal is all about forging partnerships across levels of government to bring investment into the CBD, creating almost 10,000 jobs while encouraging more people back into the city to create flow on economic benefits for small businesses,” Minister Cormann said.

“The Government is driving the delivery of major infrastructure projects to map the economic road back from the pandemic, building the economy and providing certainty for business over the long term.”

Since being elected in 2013 the Liberal and Nationals Government has committed more than $15.4 billion for infrastructure in Western Australia.