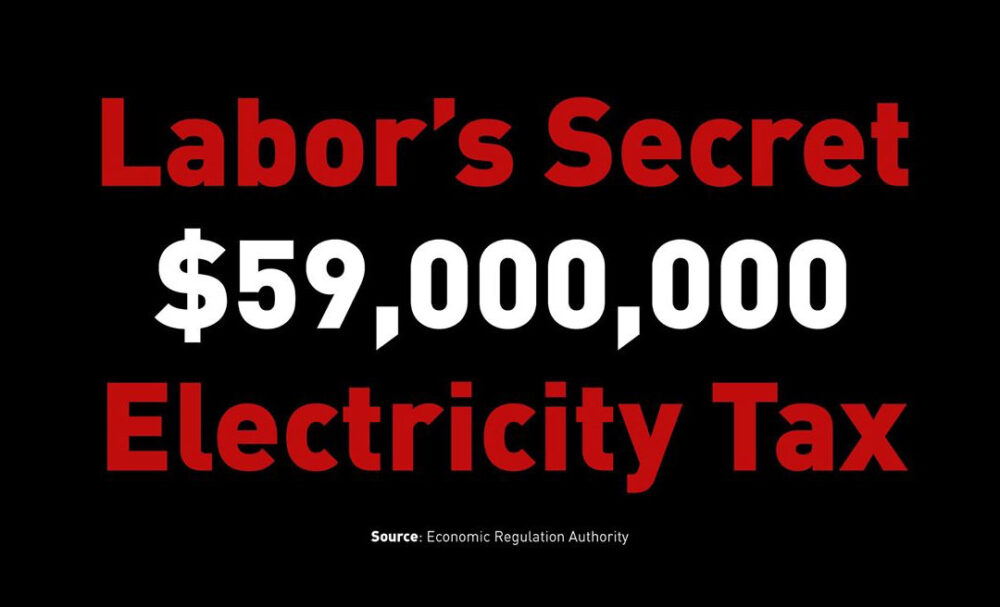 “It has been revealed in parliament today that the McGowan Government has been profiteering through a secret electricity tax,” Mr Nalder said.

“According to the Economic Regulation Authority it costs 87c per day to supply WA households to be connected to the electricity grid, but the McGowan Labor Government is charging $1.03 per day.

“The ERA report shows that the McGowan Labor Government is overcharging by 18 per cent on the daily supply charge. Effectively, this is an 18 per cent electricity tax.

“This equates to every household paying $377 a year to be connected to the electricity system, when they should be charged $318 a year.

“The McGowan Labor Government has imposed a $59 a year electricity tax on WA households.

“For about one million households on the South West Interconnected System (SWIS), that represents a $59 million a year tax windfall for the McGowan Labor Government – or almost $300 million over the next five years.

“This really hurts pensioners and the vulnerable who consume very little electricity. They are forced to pay this connection charge regardless of their consumption.

“When we were in government we never overcharged on the supply charge, however in 2017 the Treasurer doubled the daily supply charge that hurt the most vulnerable in the community.”

Mr Nalder said this was another example of the McGowan Labor Government hitting battling West Australians in the hip pocket.

“They have slugged struggling West Australians an extra $850 per year in cost of living expenses at a time when they can least afford it – and despite promising at the election there wouldn’t be any increases,” he said.

“This mean-spirited electricity tax is unfair and we call on the McGowan Government to stop this tax immediately.

“In parliament, the Minister for Energy tried to deny there was over-recovery on the supply charging by trying to include a range of additional costs beyond Western Power’s charges. However, the Treasurer has clearly stated in parliament that the fixed daily supply charge is the regulated charge determined by the Economic Regulation Authority that has to be paid to Western Power.”