The WA Labor Governments cutbacks on the Joondalup Health Campus project once again highlight a lacklustre response to health infrastructure investment under this Governments watch.

“With a health system on its knees it is extraordinary this Government would want to short-change the people of WA and cut corners on this important project, said shadow for Health Libby Mettam.

“Not only is this announcement almost identical to the media statement from the Premier in 2017, but this Government has ruthlessly cut the number of theatres from 8 to just one.

“Furthermore, there is little mention of what the progress of where the medihotel promise is now after 4 years in Government.

“This is no time to be cutting corners on important health infrastructure needs given we have a health system in crisis.
Today’s announcement also highlights the truth behind Labor’s so-called $1.3 billion health boost.

“The $256.7 million for Joondalup Health Campus was an election promise from 4 years ago but Labor failed to deliver. And of that funding, $158 million was provided by the Commonwealth.

“The harsh reality of Labor’s actual new spend for the health system is starting to unravel and the public has every right to question what actual new state funding there is in the boost or is it just a desperate attempt to deflect from the health crisis.” 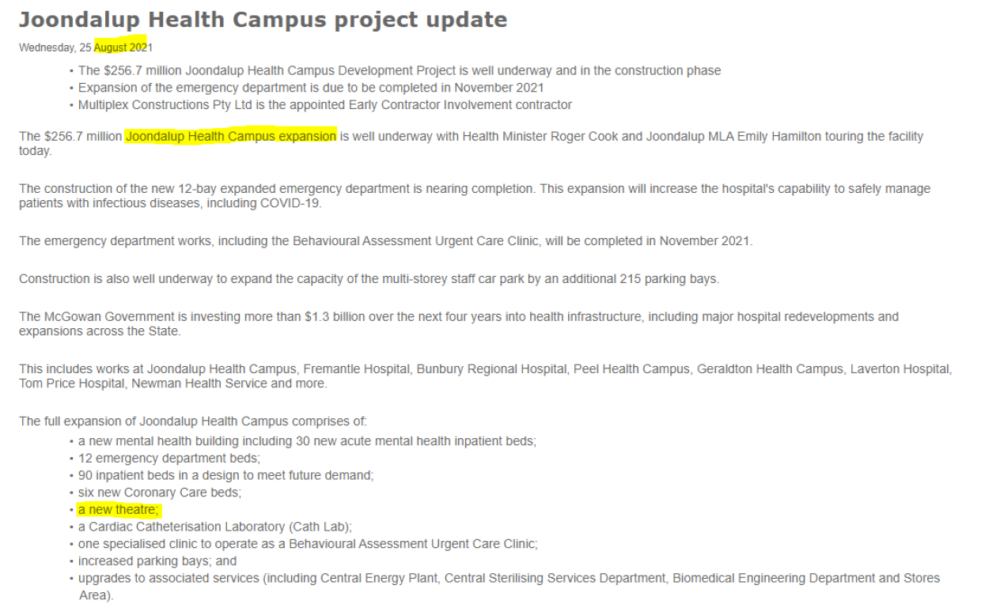 No Government fix for raw sewage flowing into the Fitzroy River

PRIME MINISTER MUST PROTECT WOMEN AND CHILDREN IN WA

The Albanese Government must immediately restore the Cashless Debit Card in the Western Australian Goldfields as an emergency measure to protect women and children from alcohol-fuelled violence. ...

National-Liberal Alliance reaffirmed ahead of Parliament

The National-Liberal Opposition has today reaffirmed the Alliance Agreement, during a signing ceremony held at Parliament House.  Opposition Leader and Leader of The Nationals WA Shane Love said the...