Premier Spinning Out Of Control 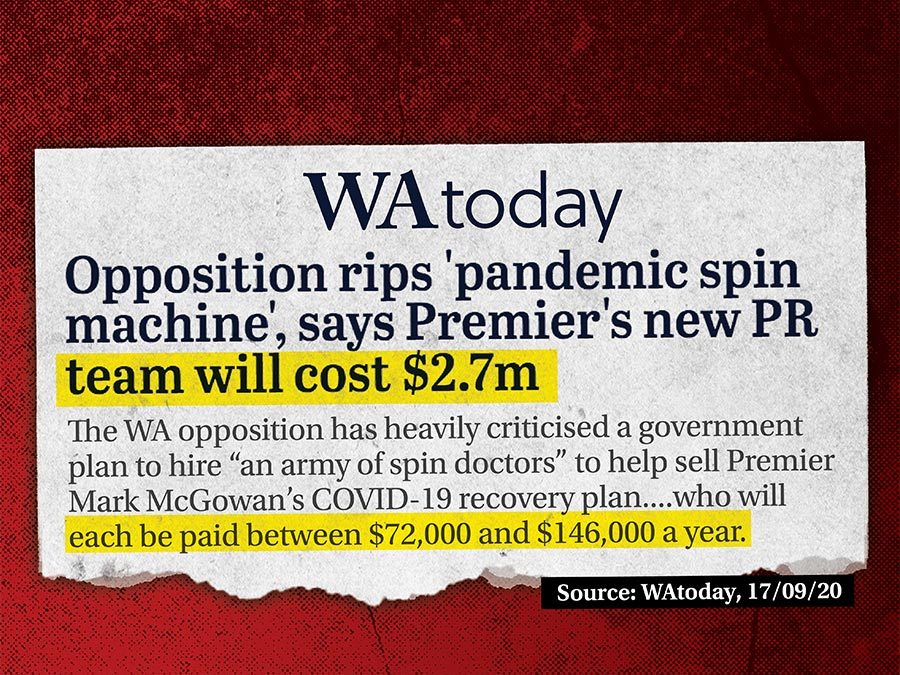 Shadow Minister for Government Accountability and Procurement Tjorn Sibma has slammed the McGowan Government’s multi-million decision to hire an army of spin doctors for its COVID-19 Communications Team while ignoring the plight of struggling small business owners in Western Australia.

“This outrageous plan by the Government to hire 22 more spin doctors will cost taxpayers more than $2.7 million,” Mr Sibma said.

“That money would provide $10,000 grants to 270 struggling small businesses owned by mums and dads.

“It is crystal clear that the Premier is using millions of dollars of taxpayers’ money to fund an army of spin doctors for his re-election. It is an absolute disgrace.

“The last thing we need is more State-sponsored propaganda and spin. The Premier is spinning out of control.

“The gall of him to even suggest that this is COVID-related is a slap in the face for all those struggling businesses owned by mums and dads.

“If the public needed information on COVID-19, they needed it six months ago when the pandemic forced the closure of Western Australia’s borders.

“Western Australia has record out-of-control violent crime, record ambulance ramping in our hospitals and thousands of small businesses on their knees because of COVID.

“But the Premier chooses to ignore police, the health system and small businesses when they are all at crisis point to employ 22 more spin doctors for his re-election campaign.

“The Liberals have repeatedly called for grants up to $10,000 to assist West Australian small businesses decimated by COVID-19, but the Premier refuses to offer them any assistance.

“WA is the only State Government in the nation not to offer these grants to small businesses.”